One of the most magnificent buildings ever designed in the UK and in the world, too; a monument displayed in the heart of England portraying pure national pride, hundreds of square feet with hundreds of rich history behind their walls, housing the royal family and each prominent for their life event: The Buckingham Palace. This is undoubtedly one of the most impressive and culturally significant symbols of London with its origin dating as far back as the 17th century, having been home to plenty of Britain’s notable aristocrats, a venue for the well-remembered events depicted in movies, books and even legendary stories from mouth to mouth. With its majestic design, a state-of-art (literally) interior comprising of hundreds of the most expensive decorations and artworks, various chambers, sheer gardens and the overall glory of imagining what kind of life these walls have seen over the years, Buckingham Palace is like an enigma to all that haven’t seen it yet. A visit to London has not been fully exhausted without paying the appropriate amount of attention to the queen‘s residence. And if possible – even entering the premises!

The Story of The Buckingham Palace 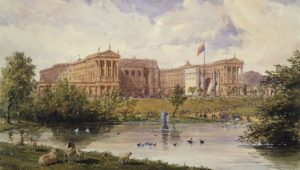 Buckingham Palace in the Past

Let’s talk a little bit about that rich history of the Buckingham Palace I mentioned. Before the original building was erected in the beginning of the 18th century, the property had housed different members of the royal circles for brief periods, during which their houses were for one reason or another – diminished. The first version of the today’s palace was built in 1703 for the Duke of Buckingham, later to be acquired by King George III and passed on from monarch to monarch, today being the core area of the immensely enlarged residence. After going through several enlargements over the centuries, the last being in the 20th century when the East front with the famous balcony ever filmed by media while the royal family is greeting crowds was built, Buckingham Palace now consists of more than 830 000 sq. ft. (still ranking in the top 10 largest palaces in the world). London’s royal house includes the overall number of 775 rooms!! 756 of them are actually bedrooms, bathrooms and offices for the royal family and the staff, but the rest 19 rooms are the most interesting that exist there. And luckily – they are open to public visits!

What can you see in The Buckingham Palace? 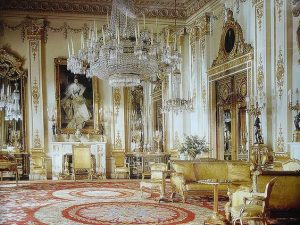 The state rooms are basically the fancy chambers you have seen in the movies whenever the plot is situated at least 60 years ago and the events include any aristocrats from the kingdom. There is an impressive Picture Gallery where you can contemplate works by Rembrandt, Rubens, Van Dyck, Canaleto and more. The Throne Room, which is more or less described by its name, is a beautiful setting in which you usually see her majesty performing her official functions. There are also several Drawing Rooms – The White Drawing Room, The Green Drawing Room and The Yellow Drawing Room – where guests would be entertained (the names of the chambers come from the formerly used ‘Withdrawing Room’). There is also a special Guard Room – of course London’s guards are an essential part of the royal palace; however, this room is not a cafeteria for tired guards, but a chamber containing royal statues and also used for entertainment events. Not to miss the famous Marble Hall that is also a part of the premises, the red and blue Chinese Luncheon Room, the magnificent Music Rooms, as well as the Bow Room which serves as an official entrance to the annual Garden Parties that the queen hosts each summer and, of course, the Center Room! Аnd the last rooms I‘m going to mention are a whole category – designed especially for the memorable visits of honorable guests – the 1844 Room created for the arrival of Nikolay I of Russia and the 1855 for Napoleon III of France. Can you imagine? A whole room at the Buckingham Palace solely for your visit…

If you can’t quite imagine the function of all these rooms, I will give you a reminder of some of the most notable official ceremonies performed right there. For example, investitures like the symbolic conferring of knighthood or any other honorable award serving to prominent individuals is not the same if performed at any other place than the Buckingham Palace. Also, each time a foreign head of state comes to visit London, the first night of their arrival is marked by a luscious banquet at the palace’s entertainment rooms including hundreds of royal guests dressed with their most elegant clothes and wearing their tiaras or crowns!  The state rooms are also occasionally used for smaller ceremonies like lunch parties thrown by the queen.
And in the past here was the place that the splendid ‘’coming out’’ balls would happen – the debutante-entrance that each little girls dreams about when watching such a recreation at the cinema!

These 19 world-known chambers are quite enough to take your breath and invade your dreams for several nights if ‘inhaled’ at once – which is usually the case, as not many tourists have the time and money to split a Buckingham Palace tour in several parts, although that is highly advisable – there is more to see at the palace! 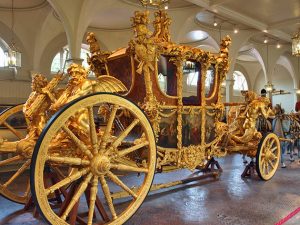 London can definitely boast with quite the beautiful parks and gardens, but the Royal Mews is a complete must-see! Even if not as a guest of the summer parties which are hosted by the queen in all of the royal splendor that you can imagine, the large park (rather than garden) with its own lake, impressive views and the exhibits of royal carriages and coaches used to take the royalties to their destinations is a place you know is worth visiting.

While there you must also take a few meters from the Royal Mews and visit the Queen’s Gallery. Its last reopening was in 2002 in honor of the queen’s golden jubilee, but the gallery has officially been functioning since 1962, housing displays from the Royal Collection which periodically change, but still never number less than 450 exhibits.

The most important practical part that you need information about is one simple question: how do you get in the Buckingham Palace? Fortunately, London takes as good care of its beloved tourists, so entrance in the royal house is permitted. With a Royal Day Out Ticket, for example, you can access The Queen’s Gallery, The Royal Mews and The State Rooms at once! If you think that the whole 2-3 hours needed to take a tour around them are too much, you might also opt for a different kind of ticket, of course, but having the full experience is highly recommended!
Here you can take a look at the prices of all the types of tickets. But pay attention to the fact that, as the state rooms serve their official functions throughout most of the year, they are publicly open only during August and September. If you haven’t booked your tickets to London yet, you might want to reconsider your timing!

And another option for visiting Buckingham Palace is during the Change of Guard Ceremony – The Schedule for this special ceremony is variable as it has to be largely altered according to weather conditions but you can always check the available dates.

I hope all this history and description of London’s Buckingham Palace was helpful and intriguing enough for you to visit the royal house even if it wasn’t a part of your plans up until now! Take your time, go through as much as you can without fainting and if you liked the experience – you can share the highlights with me and the rest of the readers in our comment section!