When you are in London, there could be no better place to spend your afternoon browsing Hyde Park. Nested in the heart of the English capital, the park is one of the few to be originally owned by the Monarchy of the United Kingdom and offers today plenty of opportunities for the upcoming tourists to delve into City’s historical and cultural transformations as seen by xLondon.city. 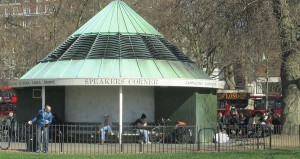 Situated in the northeast corner of the park, the Speaker’s Corner is the place where every ordinary citizen has to opportunity to talk on any subject deemed. The police consider their speeches lawful and tend to be tolerant and therefore intervene when they receive a complaint by the bystanders. There are noted organisations with well-established history of speaking regularly at the place, including the Catholic Evidence Guild and the Socialist Party of Great Britain. 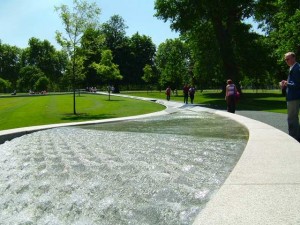 The Fountain is dedicated to Diana, Princess of Wales, who died in a car crash in Paris, France, in 1997. The monument is located in the southwest corner of the park and was designed by the American landscape artist Kathryn Gustafson. The Fountain is very accessible to the general public and symbolises the artist’s desire to build a symbol of Diana’s personality. One side of the monument’s stream bed is pretty flat and continues smoothly to the downhill end while the other side consists of variety of ripples and curves in order to reflect the two sides of Princess’s life: her happy times and her scandals. 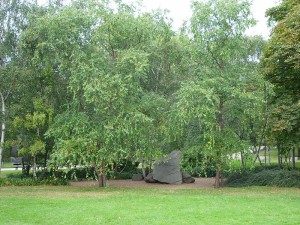 The Holocaust Memorial is located in the eastern part of Hyde Park and was the first public Memorial dedicated to the victims of the Holocaust during World War II. It was built in 1983 and consists of two large stones within a gravel bed, surrounded by silver birch tree corpses. It is inscribed with the words “For these I weep. Streams of tears flow from my eyes because of the destruction of my people” which is a quotation from the biblical the Book of Lamentations, both in English and Hebrew language. 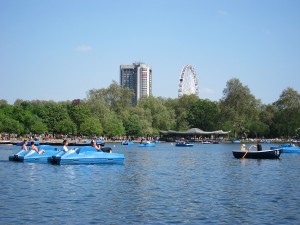 The Serpentine lake takes its name from its snakelike, curving shape, crossing almost entirely the whole park, although it only has one bend. Since its construction in the early 18th century the place has proved as a focal point for many cultural and sports event such as the Great Exhibition of 1851 and the men’s and women’s triathlon and marathon swimming events during the London 2012 Olympic Games. Today the tourists enjoy two lakeside restaurants and various recreational facilities on the lake shore beefing up their impressions of Hyde Park. 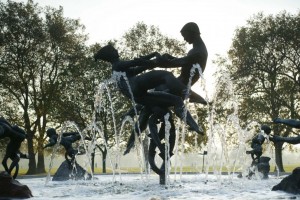 The Joy of Life Fountain in Hyde Park

Once a reservoir supplying the royal palaces with drinking water, this part of Hyde Park was once a widely admired Victorian sunken garden created in the late 1860s. Located alongside Park Lane, next to Aldford Street North Gate, the Joy of Life fountain consists of two bronze figures holding hands while appearing to dance above the water, with four bronze children emerging from the pool beneath. It is also the plane of many charity events, most recently the planting of 60,000 daffodil bulbs by the Marie Curie Cancer Care.