One of the most well-known tourist attractions all over the world, not exclusively in London, is the famous chain of Madame Tussauds museums of wax sculptures. If you haven’t been to one yet, you have surely seen your friends’ photos posing next to what seems to be a very smiley and polite celebrity like Prince William, Angelina Jolie or Tom Cruise. But when you see them on a photo with the dancing Michael Jackson in one of his best stage costumes, a flickering light appears telling you that there is no way for this photo to be real. Yet, it doesn’t matter whether its’s real – seeing a completely realistic version of your favorite movie star or sport hero and having the chance to memorize this moment with a camera seems to be quite enough of an excitement.

Tussauds as a Historic Landmark

However, selfies are not the sole reason why Madame Tussauds is such an emblematic attraction for London and since the 1970s – for foreign countries as well. A part of the original museum of Marie Tussauds’ heritage, London’s wax sculpture museum carries with it not only the glamour of shockingly realistic human figures but also the history of hundreds of years during which artists depicted faces who deserved to be remembered – be it with good or bad. Marie Tussaud, even before she actually became a Tussaud, started to make wax sculptures from a very young age and firstly depicted philosophers, presidents and later on – the faces of the French Revolution’s victims. In this way she started an honest manifestation of a collection that included famous, respected social figures, as well as unknown but deserving ordinary citizens whose names and presence shouldn’t fade away from memory. With that she started including in her collection the sculptures of murderers and other appalling offenders who should be displayed as a reminder of what humans can turn into. In the beginning of the 19th century the Tussaud family moved to Britain after some tours around Europe and established the first permanently located in London museum. After that decades and decades of new owners and new artists have given their share of effort to develop the museum – renew it, move it, advertise it, add many many more sculptures – to make it what it is today.

So you see why even though  nowadays there are more than 20 Madame Tussaud museums scattered around the world – in Europe, Asia, around the USA – the best experience you can get would be in the original home town of Marie Tussaud’s art gathering, namely in our dear London.
Today at London’s Madame Tussauds museum there are still some of her original works exhibited. Of course 200 years later many of her sculptures have also been destroyed after many many events and acts but in addition there are enough sculptures from other artists which lead up to the impressive collections of today’s Madame Tussauds. 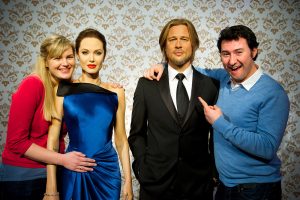 There are several sections in the London museum of wax figures: in the ‘Party’ section you can see some of today’s most famous celebrities – for example glamorous couples like Angelina and Brad. Currently there is also a ‘Fashion Week Experience’ where you can walk  around a replica of the backstage scene of a fashion show including some of the most successful models, you can even do you make up in front of a glossy mirror and go show your beauties on the catwalk! Another experience that the museum offers is to dive into the world of emblematic movies, actors and actresses and even producers or writers; you can take a photo with the classy Audrey Hepburn holding her iconic cigarette holder from Breakfast at Tiffany’s.

As today Bollywood seems to boast with great fame, London’s Madame Tussauds also accommodates several of the brightest stars of Bollywood’s scene like for example Aishwarya Rai.
For the younger audience there are also figures of Britain’s most loved vloggers depicted in their natural habitat- you can see the cheery Zoe Sugg and Alfie Deyes sitting on the exact same bedroom as  the one in their vlogs with the original toys they display in their videos! As you can expect, there are also many figures of renowned sport stars and performers (deceased and alive) wearing their most emblematic costumes – like Freddy Mercury or Michael Jackson.

Thre are also exhibits specially dedicated to some movies or series – you can take advantage of the rich collection of Star Wars figures and the iconic scenes they depict; if you have ever dreamt of sitting just beside princes Leya, mounting one of the ships used in the movies or taking part in the battle between Luke and..his father: you have the actrual chance to do this and even film you own tailored scene! There are more surprises for science fiction lovers – after leaving the world of Star Wars you can jump from being a Jedi to being on of Marvel Secret Command Centre’s supernatural heroes. You will be surrounded by pretty much all of Marvel’s characters with their  peculiar superpowers – just the place to discover you own superpower (in case you haven’t done this yet, of course)!
For the older public or the ones that feel more comfortable in the realistic part of the celebrity world, there are also figures of the English royal family (which you have most likely seen on some photos already), as well as undying genuis invntors, scientists, artists and writers that carry with them the spirit of the developing human culture, including Marie Tussaud herself! You will also be presented with the cance to see the wax sculptures of significant world leaders – politicians, activists, in summary – people who have devoted their lives to changing the world and the social scenery; I personally loved being able to get a glimpse at least of the wax copy of those great leaders! 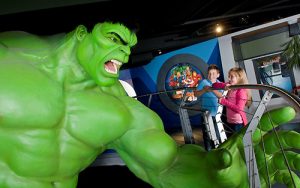 Enough spoilers on what you are going to encounter on your visit. You need also some information on how to actually get there. The museum is not open until very late, unfortunately. For those who are planning a visit in the immediate future – you can check the opening hours of Madame Tussauds Here.
As for the prices – the standard ticket will cost you £29 which, of course, includes entry to the Marvel and the Star Wars experiences and the current attraction at the museum – the curious Sherlock Holmes experience! For 21 more pounds you can provide yourself with a fast entry, saving the trouble and nerves  that come with the long waiting in line and get a bonus 4D movie experience including all of Marvel’s superheroes. If you are visiting with a group or you wish to take a whole student class to the museum – you will get very tempting discounts: check  them out Here.

There are a few other ticket options for tourists around London. It’s expected that when in London, Madame Tussauds is not the only attraction you would like to visit, so you can conveniently combine the ticket for the musem with a ticket for 1,2 or 3 more attractions in London, saving up a lot of cash. You can choose between The London Eye, London Dungeons, the Sea Life Aquarium and Shrek’s Adventure which is a true blast for children! A combination of 2 attractions will cost you £39, if you add one more – £48 and if you add the 4th one the price will rise with only £7. And Here you can browse and book your own tickets.

I hope that I haven’t spoiled your experience by saying too much on what’s going on at Madame Tussauds museum. But even if you think you know too much, believe me – at this museum there is always room for surprise! Charge you cameras, check your smiles and later you can share with us the part of the museum that you liked most!