Modern night club with a hint of classics

KOKO – Modern night club with a hint of classics

Are there any tourists left who seek top entertainment centers when heading to London?

I believe there are still a few of those. And that is completely justified given the emblematic for the capital KOKO Club, for example. Striking as one of the oldest and at the same time most in line with present-day needs for laudable entertainment, KOKO undoubtedly ranks in the top list for state-of-the-art venues, convenient for a wide range of events.

That’s why it finds a great place in our article Clubbing in London. 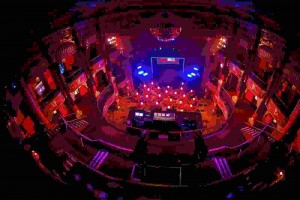 Not everyone knows that this modern site has been a notable part of London’s life for over a century. Back in 1900 it first opened its doors as a theatre called ‘’The Camden Theatre’’ capable of housing 2,434 people and classifying as one of the biggest in the area. In the years to come the nowadays KOKO club went from transforming into a cinema rather than a theatre and then into a music club during the memorable 70’s until finally it actually arrived at the state of disuse. That is the stage at which Oliver Bengough decided to embark on a restoration process costing millions of pounds and lasting more than half an year. And the results have turned out to be more than successful one might say.

Since its opening in 2004 KOKO has become famous for hosting:

and any other idea you might have for a night worth remembering.

Remarkably soon after it came into being, the club was able to brag about having achieved more than a head start. In 2005, only one year after it had been restored, the club was chosen by the iconic Coldplay for the launching of their new album ‘’X&Y’’, followed by the queen of pop music Madonna who had her album ‘’Confessions on a Dance floor’’ launched in KOKO. The year after, Elton John decided to throw a benefit party in the club for his AIDS Charity Bash and caused the attraction of many more VIP guests at KOKO. Summarizing the last 10 years it is worth mentioning that KOKO club has gained popularity by being a stage for Natalie Imbruglia, Prince, My Chemical Romance, RHCP, Oasis, Christina Aguilera, Bruno Mas, Lady GaGa, The Killers, Amy Winehouse, Lilly Allen and countless more.

This randezvous for London town adventurers has been reviewed by many of its visitors and rated as a place convenient for someone who wants to have a drink outside their usual habitat or a get-together with friends as a means of breaking free from everyday life; it also seems to be a place you head straight to if you are in the mood for a new experience or for giving in to dancing trough the night. And of course it is a venue where you would likely get the chance to hear some of your favorite performers live.

But KOKO not only succeeds in hosting impressive shows with carefully picked carefully picked musicians, dancers and any kind of performers. And what is more the atmosphere is always in tune with the tonight’s show. Rumor has it that as far as the service is concerned, the club surprisingly offers affordable drinks, of course keeping in mind that we relate their prices to those in other renowned clubs. As expected, there is some controversy among people’s opinions on the staff of KOKO, but there is practically no place immune to having a bad waitress for a while and after all, the majority finds service in the club more than satisfactory so one may choose to believe this notion. 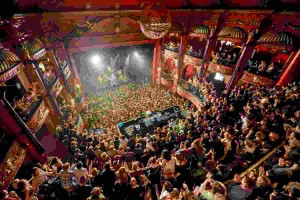 And another, probably not the last, curious fact about KOKO club is their good deed in terms of caring for the environment. The club is a proud holder of an award for Environmental Excellence in Camden Organisations (EECO), for Innovation in Waste Management and Recycling.

If after all you have read and seen about KOKO club you decide to take the matter into your own hands and pay a visit to this prominent representative of London’s nightlife, keep in mind that this would probably turn out to be a great decision and you can always check KOKO’s website and see in the program whether you are about to witness an intimate gig, a marvelous rock concert or a stylish cabaret evening. Or you could always let yourself be surprised!