Gong – The Top of The Shard

Gong – The Top of The Shard

As The Shard has now long been an emblem of London town, tourists coming to the capital are not excited only about classic attractions like the Big Ben – more and more visitors state the fact that a true trip to London includes the experience of wandering around places like The Shard where contemporary typical Londonners’ life happens. Well, this is the reason why more and more venues open up at The Shard and it has come to the point where you don’t know which one to pick and visit! I am here to help! The Shard is a definite must when you visit London with – you cannot miss the tallest building in Western Europe and the chance to get this thrilling view over the capital. And here I’m going to talk about the highest bar situated in this giant – Gong!

The 52-nd floor of The Shard is an impressive level. Hundreds of meters above ground, looking down on London, its busy crowd and all of the city symbols, this height makes them seem so small and accessible and gives you the feeling of being mighty and able to grasp the whole town in your palm (or eyes, if we need to talk literally). On one hand, this could be a bit overwhelming, so maybe for the light-hearted a lower level of The Shard would be advisable, but for the braver ones – Gong can turn out to be the most significant memory from the whole trip!

Yet, Gong is not only a huge window over London, it is also a bar determinedly trying to be the highest in all senses, so we need to look through some more characteristics of it, not just the view. 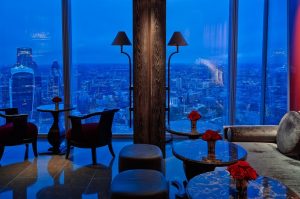 Gong at The Shard

As hard as you may think it would be to shift our attention away from the scene of London from above, don’t underestimate the influence of the ambience on you. A bar needs to be welcoming, stylish and appropriate for the target customers in any case – a hole in the atmosphere would overrule any advantage the place might have. And as for Gong – one can undoubtedly see how much effort they invest in the strive to be the best; it’s clear that a lot of money have been spent on Gong’s interior. But this does not necessarily mean that the money are that well-spent…Gong consists of several small rooms which can sometimes look cozy and intimate, however, sometimes it could prove to be a little too cozy and intimate – for example, if you are hearing too much about the sex life of your table neighbor.  And as many bars situated in fancy buildings like The Shard, Gong has gone somewhat over the top trying to look contemporary, flawless and high-class – now it rather looks cold and distant. 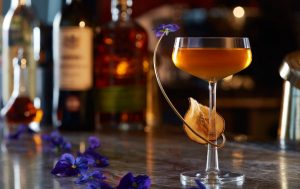 As for the cocktails they offer, I can personally say that the menu has some very fresh offers. On the other hand, I have heard more than one complaint that Gong’s drinks are not the creation you would expect for such prices and from such a trendy-wanna-be bar. Maybe my standards are not as high as they should be, or maybe some other visitors were biased or upset by some other feature of Gong. The menu looks really nice with some story to each series of cocktails; what I personally liked most was The Elixir of Success. What I failed to try, mainly because I was starting to get worried that mixing too much alcohol with such a precipice before my eyes might not be the best night ever, was to check out the champagnes and wines! And as Gong is trying to pose as a symbol of best champagne flavors, I see that I should have tried at least a glass. I guess this will be your job – if you decide to visit after my review: give the champagne a shot and then share your thoughts in the comment section below!

Regarding the food that Gong offers though I cannot be that positive. It is a classy bar, yes, we would not expect to order fish and chips or some bacon with a beer. But still, you need a bite with your drinks and it should be a light and fresh one. Unfortunately, Gong’s menu does not offer a great variety of tapas and those that are offered are not as light as one would wish. This is something they can easily improve and thus add a great plus to the experience of being at Gong – that’s exactly why I’m mentioning it, constructive criticism!

Another piece of constructive criticism would be addressed to the staff at Gong. I expect that in such places the staff get enough of a wage to try and be a bit more engaged in their jobs than a regular server at a fast food chain would be. Yet, I am rarely proven wrong and I still manage to get disappointed… Although I have seen a lot worse, Gong’s staff is definitely one of those who would display the medium level of politeness, attentiveness and the habit of smiling to compliment your experience so that you feel comfortable staying for hours. At some point you will get annoyed waiting again to order your next drink the name of which you seem to have already forgotten…Maybe this was not the case with all waiters, because I noticed some tables that lacked our problems – I am giving Gong the benefit of the doubt this time, but still, a bit more effort wouldn’t hurt anybody.

As can be expected the prices at Gong are not the same as any other bar at ground level. And this is okay – everyone agrees that extra features should be extra charged. However, it seems kind of unnecessary to pay £17.00 for a regular cocktail. Champagnes and wines are also accompanied by quite the sum in the menu. This would be okay for a restaurant or winery opened especially to host connoisseurs, but as this is not the case, I believe Gong can include a little wider choice of drinks in its menu.
But overall, even if Gong charges more than it is reasonable to, I don’t think anyone expects lower prices at the sole top of The Shard. 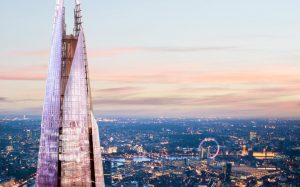 A benefit of Gong is that it is a part of the Shangri-La hotel, so you could expect some discounts if you are staying at it. And we also hope that a hotel bar might actually try to improve the flaws in food and service I’ve mentioned.

Another pro of Gong is its working time – you can say at the bar up until 2 a.m. and again, keeping in mind the view as a main reason to visit it, such a late hour would undoubtedly be a great time to look over London!

What I don’t like about Gong though is that just at the end of the hall there is a gym and a swimming pool, so if you need to use the toilet or go around for some other reason, your whole state of drinking at the highest point on Europe gets kind of confused by the sweaty and smelly fellows running around…

In the end, Gong might not be the perfect venue, but if you are looking for a memorable night at the very top of The Shard over some refreshing cocktails – than Gong is the perfect venue for you! And this can quire overweigh the neutral faces of the waiters or the not so yummy snacks!